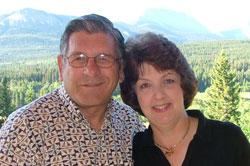 Native Bible Centre is a ministry of InterAct Ministries of Canada and is directed by Ed and Glenna Houston. Ed and Glenna met in southern Oregon when Ed returned from service with the U.S. Army in Vietnam. They were married in 1968. In 1970, when their oldest daughter, Carmen, was 6 weeks old, they moved to Montana where Glenna attended and Ed graduated from Montana Institute of the Bible in 1973. In 1975 they began a church-planting ministry among the Chilcotin Indians of British Columbia. After four years, they moved to Williams Lake where they, along with other missionaries, were involved in the establishment of the Williams Lake Native Bible Church. They relocated to Alberta in 1986 to minister as InterAct’s Canadian mobilizers. In 2001, the Houstons joined co-workers in Kamloops in their church plant among Shuswap First Nation people. In 2003, Ed and Glenna took the reins of Native Bible Centre in Kamloops, later moving it to Wardner, BC in 2011. They have three children and seven grandchildren.

Contact Ed or Glenna today and find out how you can learn more about the Bible through an NBC course!